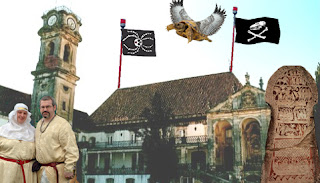 Colynesburg, founded in the old ruins of Greenhithe via secret charter involving a former baroness of Septentria who shall remain nameless

In 1997these two areas were granted autonomy by their respective seneschals and banded together to form Whit’s end (later known as Greenhithe). In July 2002 Colyne and Þorfinna moved from Geolugeat—a small bordertown in eastern Eoforwic—to the Greenhithe territory, upon a manor they called Drew’s End. Though local officials tried mightily to tame the land, it was a wild place. Colyne and Þorfinna began to carefully plan for the eventuality that the local government might fall.

During the winter of 2007-08 Greenhithe was abandoned as “too wild and hard to control” as one kingdom official put it. Sweeping deftly in, Colyne and Þorfinna and their cadre grabbed the reins of power. Before baronial officers could try to stop them, the Plaid Watch had secured all the forts along the border. Claiming themselves to be the Vulpine Region of Colynesburg, they pledged loyal service to the King and Queen (as well as a promise to continue to pay taxes). They also provided copies of a secret document, reportedly signed by a former baroness of Septentria, granting them the rights to claim Septentrian land that was not currently occupied by a recognized local government. The Royalty therefore did not move to intervene.

The area around Drew’s End was made the capital of Colynesburg, and named Þorfinnastaadr.
Posted by Todd Fischer at 5:26 PM